We are actually gathering direct electrical free energy from the environment. We see 2 distinct types of electrical energy that we are designing machines to gather; electromagnetic waves, and free ions. There is a huge amount of energy around us all the time in the form of electromagnetic ‘waves’.

There are a broad range of frequencies included in the electromagnetic spectrum. The longer frequencies we associate with heat that we can feel; as per ‘infared’. Heat is hard to convert efficiently to electricity. Generally, it is done using 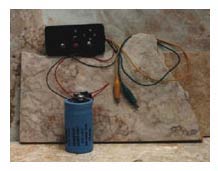 As the wave frequencies increase in vibrations per second (known as cycles per second or Hertz), the wave-length gets shorter and the wave’s energy increases (this is very important).

We start with radio and TV frequencies. The energy from these frequencies can easily be absorbed by various shaped antennas. This energy is available pretty well anywhere, but in any particular location you need to design antennas to absorb the type of energy available there. There are people who live near large transmitters that draw substancial amounts of power ‘free’. You can learn more about this in the ‘Free Energy Accumulator’ document.

As we further increase cycles per second (cps) we move into the frequencies of ‘visible light’. Most people are are able to see these frequencies directly, the reason that we can see each other is because of all the light reflecting everywhere. The best way to collect the energy from these frequencies is with so lar cells. Another way is to shine the light through glass onto a dark surface, which will absorb the light’s energy and re-radiate it as heat (lower grade energy wave). We want to convert our electromagnetic frequencies into actual electricity whenever possible, because this is the highest grade of power.

Then we get into the highest frequencies, which Nikola Tesla experimented with (like gamma rays) as he developed free energy receivers.

Finally, we deal with gathering free ions, which tends to be a DC type of electricity. Again, we are experimenting with gathering this energy, covered in the ‘Free Energy Accumulator’ document.

There have been machines of this type built that have put out 50,000 watts of usable power.

MARK US AS NOT SPAM! Be sure to add website_emails@mg.eagle-research.com to your safe senders list and check your spam or junk folders and move our emails to your inbox to be sure that we're not ending up caught in your spam filters Dismiss